Heir to a thriving family business in New York, this stunningly beautiful straight A student majored in Business at Bucknell University.  It was the final ingredient for a lifetime of grooming to return home and carry forward a third generation real estate brokerage.  No one better personified a young female version of Gordon Gekko.

Somewhere along the journey, however, Ms. Gekko transformed into Cat Stevens.  Instead of returning to New York, she moved into a hippie commune in Oregon, tossed the Gucci clothes in favor or earthen gowns, became an ardent vegetarian, and most significantly of all, she rejected a comfortable, secure business track to pursue full-time her passion for music.  Ah, take note of how I phrased that..  her passion for music, NOT her passion for the business of music.

Music became her life.  She performed anywhere she could: kindergarten classes, nursing homes, campfires, bars, casinos…  No venue was too small but over time the venues grew larger.  She was the opening act for several artists you’d definitely recognize and had agents chasing her to sign contracts and commercialize her talents.

Much to the chagrin of her family and hometown friends, however, this talented woman had zero interest in commercial success.  My guess  is she feared a focus on profits would spoil her passion’s purity.

Her commitment, though, came at a price.  For more than twenty years she faced hardships one associates with a starving artist: no shopping sprees, no savings plan, and to my kids’ horror, no Disney vacations.  The starving artist was making ends meet with part time work and self directed engagements that kept her music pure and her cupboards bare.

To be honest, I’ve often been frustrated by her choices.  “So much potential [to be more comfortable/more stable/more conforming/more beautiful/more “normal”].  Why is she squandering her education and connections on a passion that barely pays the bills?”

It’s easy to belittle those who choose an unconventional path and I’m embarrassed to say there are times I’ve been the belittler.

One person who never belittled the starving artist’s choices: her mother.

The artist’s mom could have voiced the most frustration.  After all, her daughter never applied her college degree.  Abandoned the hometown business.  Moved to a hippie commune 3,000 miles from home.  Chose a life that would make any parent worry.

Yet the mom sang only praise.  She marveled at her daughter’s musical talents.  Sat transfixed at every performance, throwing evil stares at anyone giving less than rapt attention.  Delighted at every song the artist released.

Mom’s superfandom was unwavering.  Mom looked beyond the odd choices and sacrifices and celebrated the artist’s commitment to her craft.  I, the skeptic, questioned the mother’s cheerleading and secretly wished she’d grab her daughter by the ear and yank her back to Planet Earth.

Just weeks ago, however, at cheerleader mom’s funeral – of all places -, my two decades of skepticism vanished in the span of three minutes.  The funeral was going through its normal paces when the artist rose to sing Leonard Cohen’s Hallelujah.  The church’s design is such that the choir is above and behind the congregation on a balcony, meaning the audience can hear but not see the performer.   (Picture a church version of the TV show The Voice.)

For the first time I was forced to listen, not watch, the artist’s live performance.  Instead of judging her unconventional wardrobe I paid attention only to her voice.  Instead of watching her performance through a fog of frustration I had only my ears to “see” her work.

And lemme tell you, her performance was otherworldly.  The range of her voice, its crispness, the absolute beauty of every note was unlike anything I’ve ever heard from a musician.  Ever.  As I glanced around the church I saw others equally mesmerized by that voice from above.  Heck, even the priest who moments earlier was practically dancing an Irish jig as he celebrated the departed’s “new seat next to Jesus in the Kingdom of Heaven” was in tears as he absorbed the artist’s angelic work.

Now here’s the kicker: The congregation’s reaction to the artist’s performance was akin to only one other person’s reaction I’d ever witnessed.. that of the woman lying in the casket.

In that moment I realized her mom, older than I and for years fighting illnesses that sapped her health, had better vision than I.  While I’d spent twenty years fretting over the artist’s unconventional lifestyle and allowing my prejudices to taint my view, her mom was kind and loving enough to look beyond the asymmetry and embrace the artist’s true genius.

To my mother-in-law, Marian:
From beyond the grave – at your funeral! – you hit me over the head with a lesson I’ll always appreciate.  If you really are sitting shotgun alongside Jesus, I know you heard that performance, loved every second of it, and are smiling knowing that everyone in that church finally sees what you always did.

To my sister-in-law, Jennifer:

You’ve invested a lifetime sharpening a skill that until Marian’s funeral, I underappreciated.  I am humbled by your beauty and grateful for the performance that finally shook me free of my judgements.  Even if your musical talents never generate a dime, you gifted everyone in that church with a priceless performance that brought more value than the biggest real estate deal your family’s business will ever generate.

To you, kind reader:

Next time you encounter a struggling artist who’s sacrificing worldly comforts in pursuit of his/her unique interests, save yourself the years of heartache I heaped upon myself!  Look beyond your own boundaries and admire the unusual path he/she has chosen.
Oh, and if you’re ever at one of my sister-in-law’s live musical performances, give her your undivided attention or I’ll shoot at you the same evil stare my mother-in-law used to (rightfully) shoot at me. 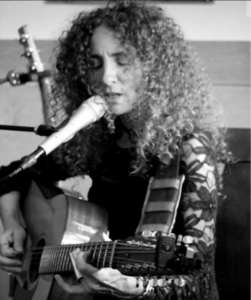 For more than 20 years Ben has led sales teams that delight their customers and crush their competition. If you’re a believer in fancy logos, pretty brochures, Google ads, and big data you will hate Ben. If you believe your company’s success depends mostly on trusting relationships and flawless execution, Ben’s the guy for you. Ben lives in State College, PA with his wife, three daughters, and foofy but badass dog Ginger. He’s a longtime competitive triathlete and the VP of KCF Technologies, one of the nation’s fastest growing technology companies.